Having taught middle school immediately after leaving college and parenting four students in the Cambridge Public Schools, Cambridge School Volunteers’ new NetPals director is thoroughly steeped in experience with these critical years of adolescence. Meg Ramsdell accepted the position as director of CSV’s NetPals program in early October, after serving for two years as a program coordinator for NetPals and Learning Centers, another upper school program operated by the organization. Ramsdell began her association with CSV as a volunteer in the outdoor Art & Science in One program. She also volunteers at the Waltham Fields Community Farm, which she calls a “magical place.”

Ramsdell will continue her work in the after-school Learning Centers at Putnam Avenue Upper School and Cambridge Street Upper School in addition to her new role as NetPals director.

Cambridge School Volunteers welcomes another new member of the NetPals team this fall,  Megan Andres, who will also take on a role as a Learning Center coordinator at Rindge Avenue Upper School. Andres has a history of teaching children with speech and language delays as well as a small business operations background. Also a public school parent in Cambridge, she has volunteer experience teaching adult English language learners.

The third member of the NetPals team is Analía Ivanier, who joined CSV in 2015. Ivanier holds a Master’s Degree in Sociology and Education from Columbia University Teachers College, and she worked in educational research positions at the University of Buenos Aires, Columbia University, and Harvard University. She began her association with CSV as a volunteer in the Lectores y Amiguitos program, a Spanish-language Reading Buddies program, and is also a Cambridge Public Schools parent. In addition to her NetPals role, Ivanier coordinates CSV’s Learning Center at two schools, Amigos and Vassal Lane Upper School. 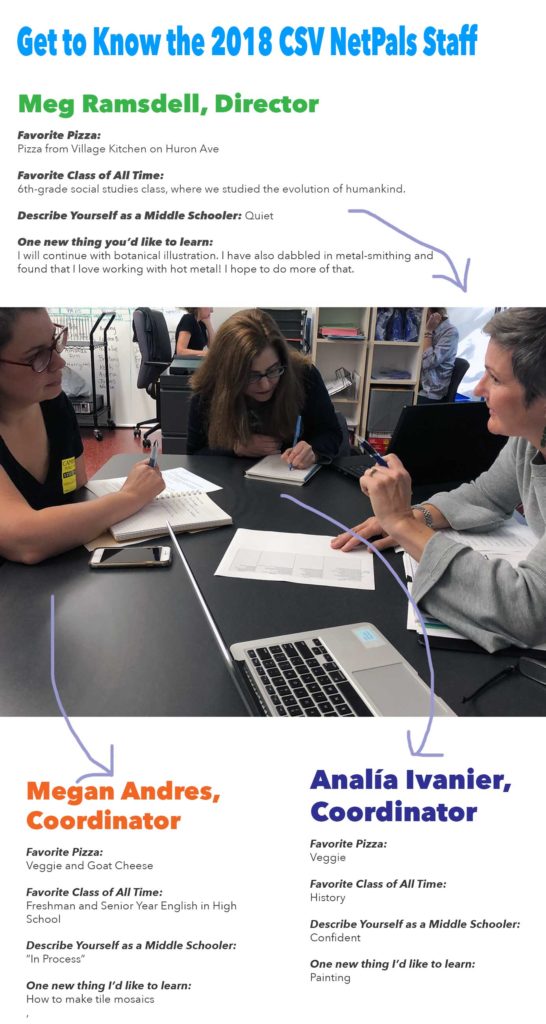